Janet traveled to be with Roy in the hospital. Diagonosed with colon cancer, he was suffering from chemotheapy. He asked, “Did you keep those letters I sent you?”
Janet replies, “Most of them, stored in a box.”
Roy adds, “You'll need those to write my story. But, I promise to keep this secret from my wife. On the day we met, we agreed to never discuss our past.”
During the next four days, Janet types on her laptop as Roy shares the details of his arrests and accomplices.
Roy recovers and leaves the hospital.Janet drives him to his home, a camping trailer outside Albuquerque. She has lunch with him and his new wife.
When Roy asks about writing the book, she tells him, “I'm working on it.” Janet thinks, “I can't glorify a criminal.”

Janet cleans her closet and discovers the box, “Keep Dad's Letters.” She reads about his public defenders. On the Internet, she uses “Google” to search his name, “Roy B Scrivner.” She finds the website: “Court Listener” that lists 2 court of appeals decisions. She visits the University of Arizona Law Library.
Janet calls her Dad. “I researched your name in the law library and other attorneys are citing your case. I think your case has legal merit. Do you want to write to the governor and request a pardon?”
Roy replied, “Wait, now. I served my time. I want to keep my life private.
So Janet shelved his story, again, as unfinished business.

In 2018
Janet changes residences. She unpacks the box, “Keep Dad's Letters”.
She calls Roy, “I'm retired from teaching and now I am ready to write the book.” 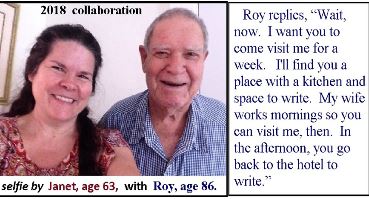 Each day, Janet brings old letters to Roy's home and he explains more details of his life. He vents frustration with his legal battles. Her thoughts, “You know, my Dad is still angry after all these years.”
By the third day, Roy, again, signs his Life Rights Story agreement and smiles, “I like the title, Most Wanted Dad.”
On the 5th day, he admits, “My wife is coming home today from her trip. If you need anything else, we can chat on the phone. But, I'll call you.”

Ironic, the Corona-Virus pushes the daughter to finish his story, being the same age as her Dad when he was paroled. Janet scans Roy's letters and documents into his the manuscript.
Bi-weekly, Roy calls Janet and they talk on their cell phones. He prefers to hide his conversations from his wife, calling his daughter on Monday or Wednesday, when his wife is at work. Each chat lasts about 20 minutes and begins with Janet asking a life-in-prison question.
Sometimes, Roy discusses politics and admires President Trump for “getting the job done.” Outdoors, in his front yard, he was building an iron fence and welded a “tiny cross” in the corner post, that only he knew was there. Roy admits, “I love Jesus Christ and read the Bible every night.”
Janet looked forward to his words of wisdom. In his mind, the Corona Virus was a ploy to make the doctors rich. Her Dad believed everyday should be Christmas, to be thankful more than just on Thanksgiving Day. Our loved ones need to shown appreciation more than just Valentines Day.
Her Dad was a problem solver. “Be smarter than the computer. Be smarter than the truck. Think out of the box to solve issues.”

Our Last Conversation
was the end of June. Roy called with a 30-second chat. “I'm just wanting you to know I am okay. I don't feel like talking today.”
“Dad, I'm glad to hear your voice. Call me anytime. I love you, Dad.”
“I love you, Jan. Bye.”
Janet waited 2 weeks, but he didn't call her back. She mailed him a double-stamp store-bought $5 card, a combo Father's Day – Happy Birthday card with her own message, “Everyday is Father's day because I'm always thinking about you.” Janet felt nausea, “My pancreas is upset, again.”
On July 10, a week before Roy's 89th birthday, Janet received the expected news – on Facebook Messenger via her i-phone, Janet was informed by his wife, “Roy died yesterday” with her contact cell phone number.
Janet calls his wife and she explains, “Roy has been sick a week. He had a massive heart attack and went quick. I did not know he had brain cancer.”
Janet replies, “Thanks for finding me. Did Roy receive my card?”
His wife replied, “Yes, he did.” She bid farewell.
Janet steps outside and talks to Heaven. “You know, Dad, I will finish.”

In August, preparing to create a YouTube video, Janet mailed off her Dad's Mini DV tapes to be converted to a digital format.

In October, Janet received the mp4 files of Roy Scrivner speaking on camera during his 2004 interview. She created a video to be a supplement to the book, “Most Wanted Dad” and will uploaded that as a YouTube video.


In November, manuscript is almost done.

Janet set a goal to publish this life-in-crime story by December 2020.